So I updated an in-development site from 4.x to 5.0.2, then moved it over to a new instance on a new server (also on 5.0.2). When I migrated the content’s JSON over I ended up getting an extra tier out of nowhere, this one being named after the title of the site. I archived it, but it unfortunately still shows up in the Post Access → Specific tier(s) → Select a tier dropdown menu.

Next up I needed to change many internal links from their previous Medium links to the site’s new domain. I exported the content (from 5.1.0), changed things with Sublime Text, then imported the JSON back into Ghost. Although an extra tier named after the site didn’t start appearing on the /membership page like last time nor on the Membership Tiers section of the admin like last time, an extra tier of that name is now appearing in the Select a tier dropdown menu under Post settings.

On top of that, while all of the existent tiers this time got doubled up and so appear on the /membership page and in the Select a tier dropdown menu twice, when I go and try and delete any of the duplicates in the Membership Tiers section of the admin the selection box opens up for both the original and duplicate tiers. 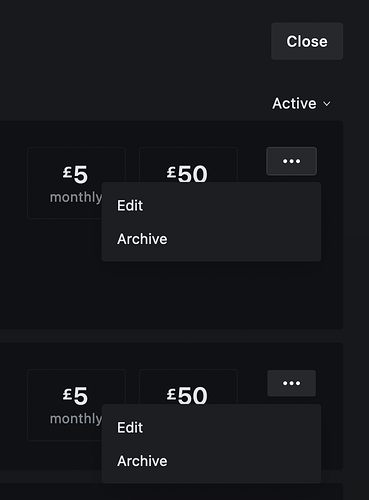 I’ve so far refrained from doing anything else. If anybody on the Ghost end would like to ask me any questions about this – or even check out the site themselves – please let me know.

Addition: Ah yes, if it matters I can add that the benefits didn’t get included in the duplicate tiers. Moreover, if I try to edit one or the other (duplicate or original) I actually get either the tier without or with the benefits. I haven’t tried archiving anything yet.

Thanks for the report - I’ve confirmed the issue and have a fix in progress.

This is now resolved in Ghost v5.2.2 - thanks for reporting!

Hey @matthanley, that’s great, thanks! I do have a few questions though on how I should proceed from here if you don’t mind.

I’ve updated to 5.2.2, and as I suppose you’d know the duplicate tiers weren’t removed. I could archive them (I’m holding off doing so until hearing back), but I’m concerned they’ll persist in the Post settings → Post access → Specific tier(s) sections as did the aforementioned tier that was mysterisouly created (and titled after the publication’s name) when I initially moved instances. I suppose what I’m asking is if there’s any way to delete a tier, particularly when these tiers have never been used and are just for testing purposes.

If it makes any difference this publication will be moving to Ghost(Pro) prior to launch.

This topic was automatically closed 90 days after the last reply. New replies are no longer allowed.