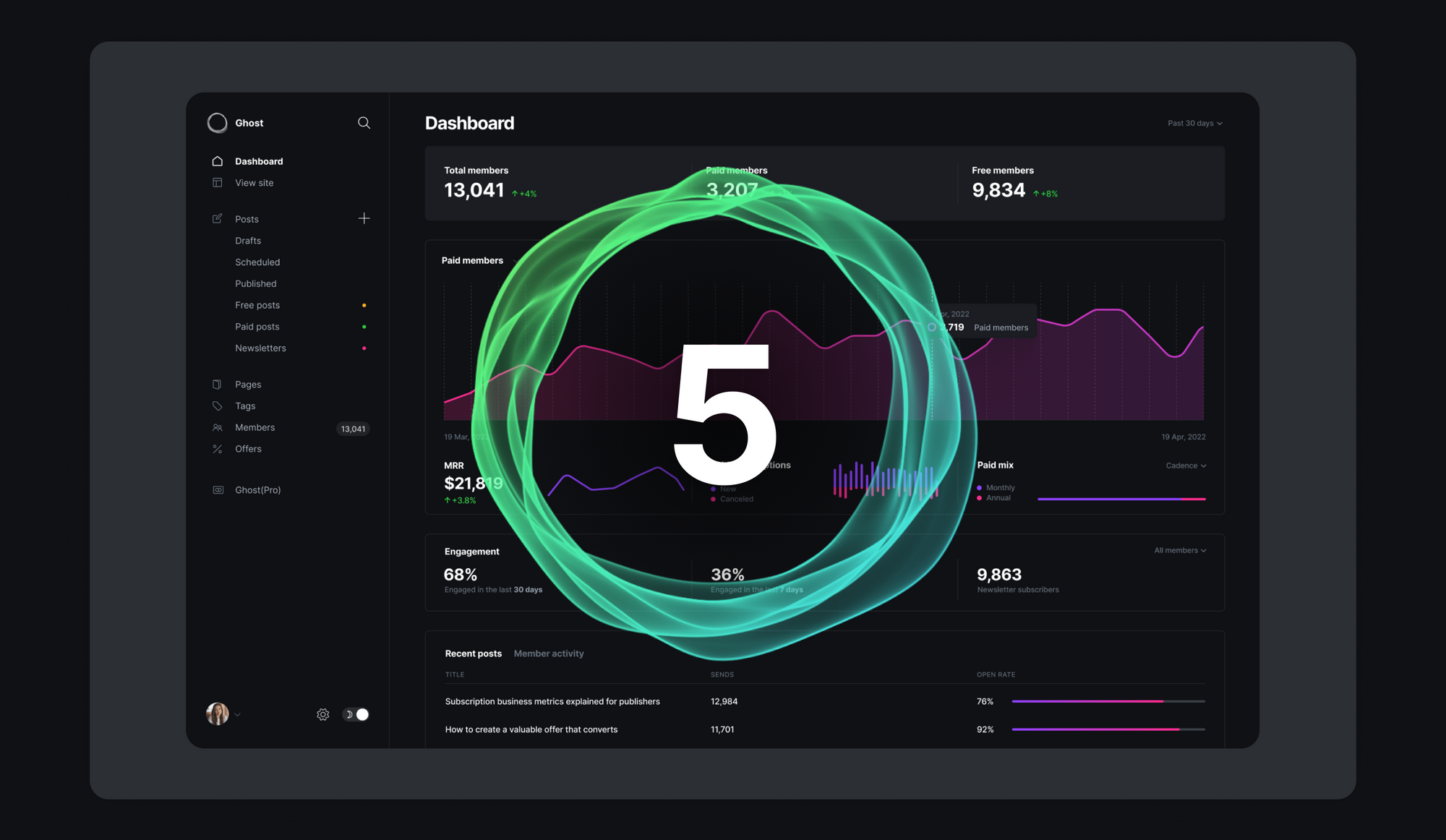 So what's new? Well. There's a short version and a long version, and we wrote down both so you can either save time, or go deep. Choose your own adventure.

If you just want the highlights of what the deal with 5.0 is, here's the lowdown:

If you want to try any of these things (and the many more smaller improvements) go ahead and sign up for a free trial on Ghost.org and see for yourself. It's live now.

Or, if you want the long version and some of the story behind Ghost, keep reading. 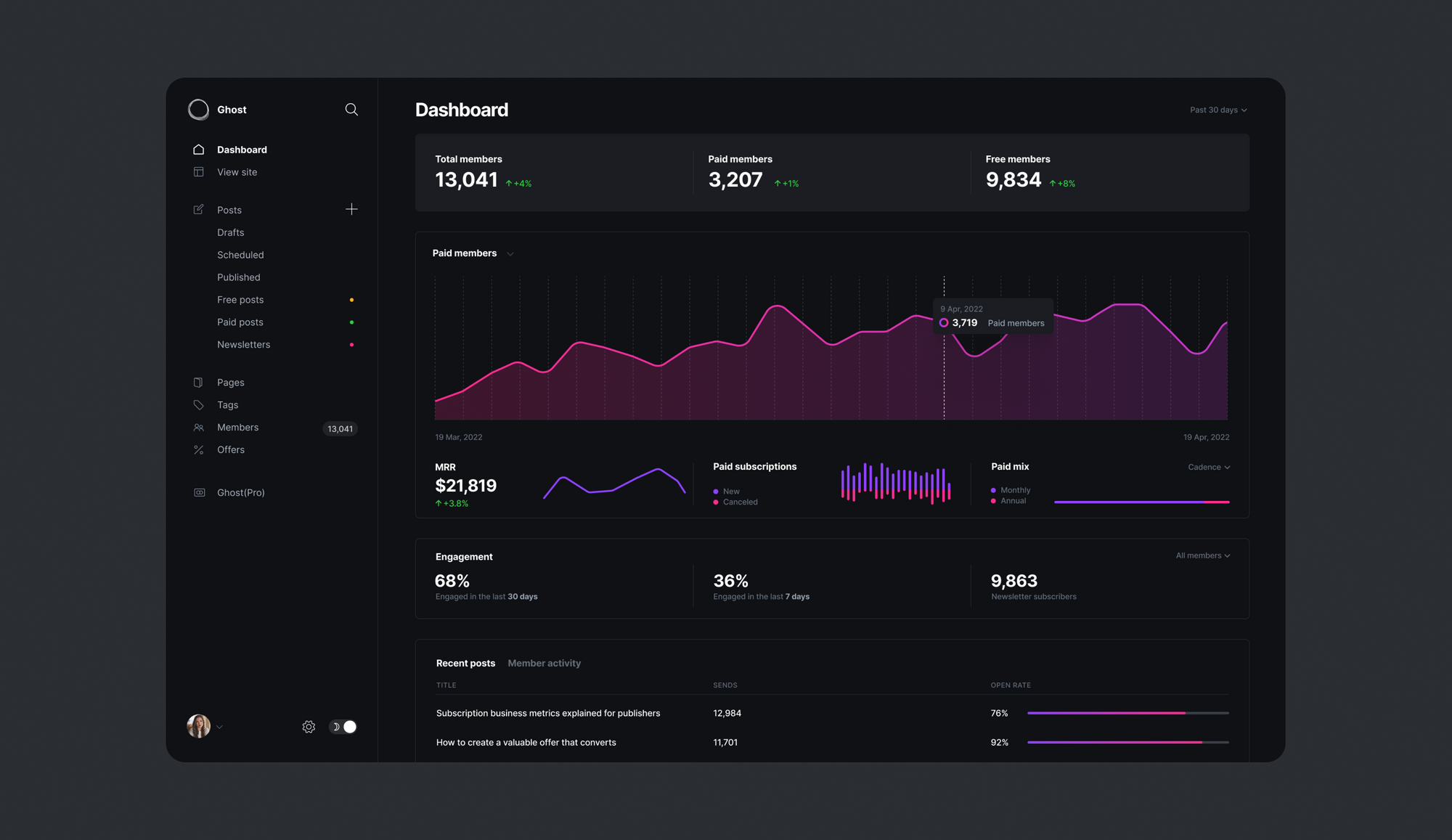 Last month Ghost turned 9, and now feels like a good time for a little reflection on the journey so far. We've learned so much after building this thing for almost a decade, and have never been more proud of the product or the team behind it than today.

Ghost's mission from the start has been to create a focused platform for professional publishers, and that mission remains as strong as it ever has been, though the product has evolved significantly from humble beginnings.

Back in 2015, a full 7 years ago, we tried to imagine what the future might mean for "professional publishers" on the internet. Medium was as popular as it had ever been, had recently launched an iOS app, and was constantly touting big name authors who they were paying large sums of money to write on their site. We got compared to them a lot, but never shared their vision of a future where all the best writing on the internet lives under a single ubiquitous Silicon Valley brand.

So we ignored the blogging-social-network holy war, and instead focused on making a better product.

In the end, we mapped out where we thought things were headed, summarised here in the form of a (very bad) 7 year old keynote slide. 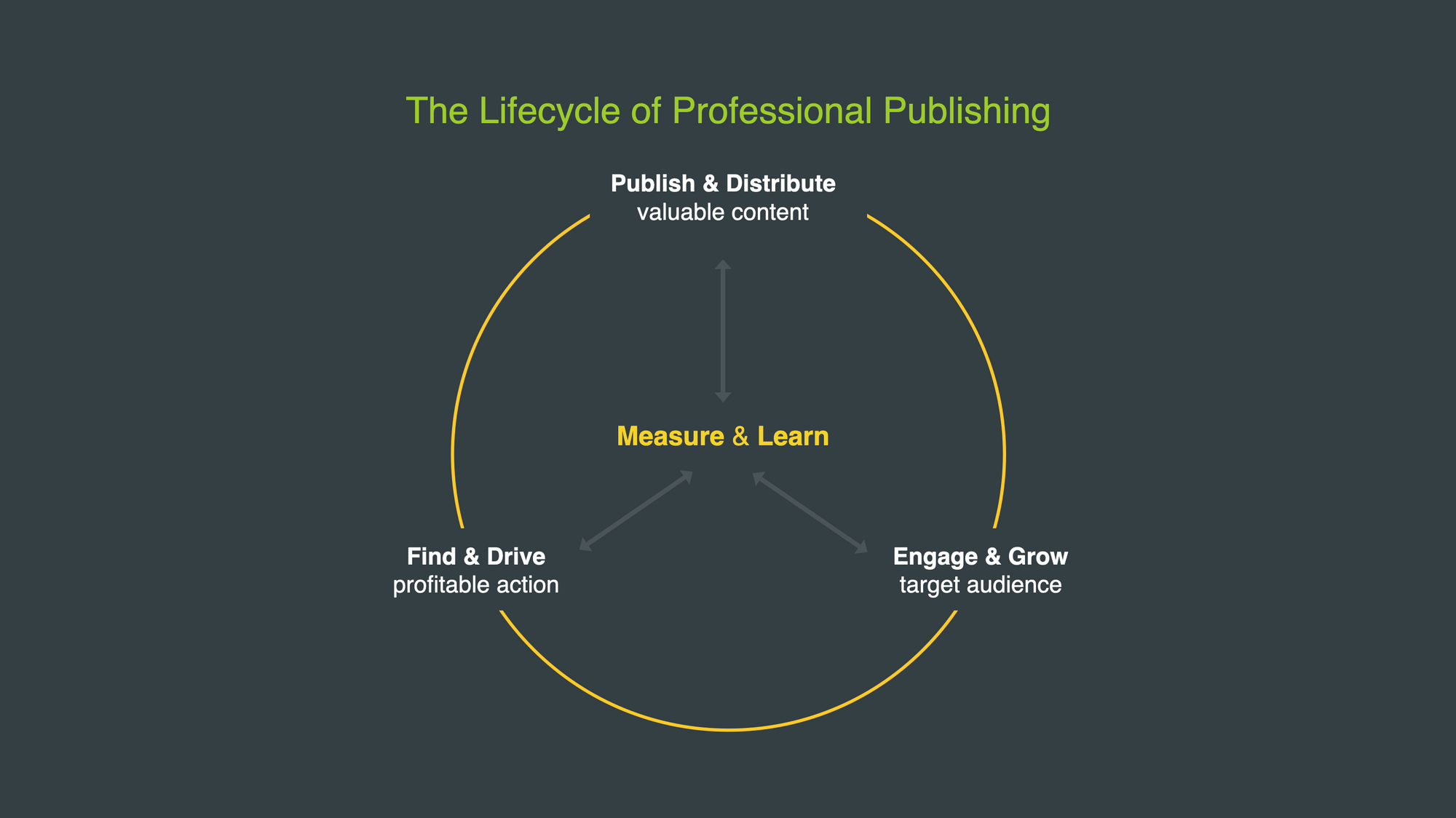 We'd solved the top of the diagram with a modern CMS and a great editor, but so had about 10 other products with increasing popularity. We needed a bigger purpose for Ghost, and this diagram has been the map we've used to find that purpose ever since.

The "find and drive profitable action" language grates a little, in hindsight. We were looking closely at early movers in subscription publishing like Ben Thompson and Stratechery, but we also imagined that there could be companies whose publishing motivation is content marketing, or free publications like Wirecutter who might care more about affiliate revenue. "Profitable action" was the rather ugly catch-all term.

So, with our new plan in place, we started building. Sort of.

In 2015 Ghost had 3 product engineers, $36k MRR, and no other funding. There was no way to "take a big swing" or throw lots of people at the idea. We had to be content with quiet, slow, incremental, unglamorous progress.

It took us 3 years of work improving the existing product before we could afford to hire more product engineers to take on new ideas, and a further 2 years to build and launch a first beta version of memberships inside Ghost — by which point the creator economy was just starting to take off, and funded startups were starting to appear in the space.

Then, last year, after an incredible amount of work, we finally launched the first public version of the Ghost we had imagined all those years ago, designed for the full lifecycle of professional publishing. We launched and then waited to see if we'd been right about where the future of publishing was headed.

Our measure of success to decide whether or not it was worth continuing down this path was whether we could turn Ghost into a "platform" according to the Bill Gates definition:

A platform is when the economic value of everybody that uses it, exceeds the value of the company that creates it. Then it’s a platform.

We didn't have to wait long.

This time last year — we set a goal to have revenue generated by @Ghost for others, exceed our own. Now, 12 months later, we've hit that goal and gone even further. 📈

As of today, that number is now somewhere North of $12M ARR — and the rate at which new creators and publishers are growing on Ghost is accelerating. Fast.

Which leads us to...

Almost all of our work since the last major release has been a sprint to keep up with overwhelming demand. Now, we don't just have new creators on Ghost, but established brands and publishers with multi-million dollar revenue streams looking to grow their businesses.

So, the focus of Ghost 5.0 has been on expanding the foundations of memberships and subscriptions to meet the needs of those publishers, and helping them build healthy, sustainable businesses around their audience. From world-famous publishers like David Sirota, to YouTubers with millions of subscribers like Ali Abdaal, to forward thinking startups like Buffer who specialise in incredible brand journalism. 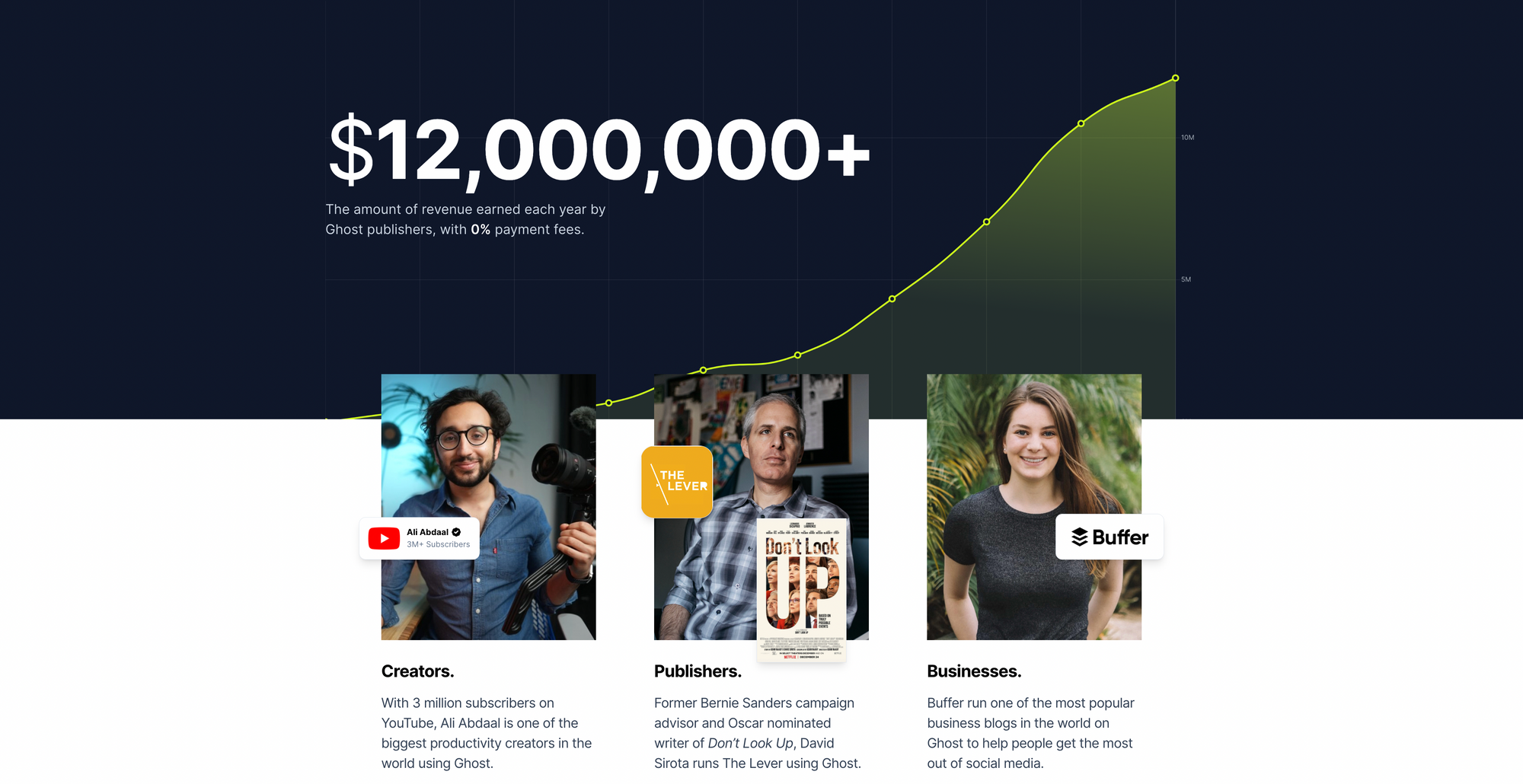 Based on the feedback we've had in the last year, we've heavily expanded Ghost to meet the needs of those publishers and make it work better for them.

Here's a rundown of what's new 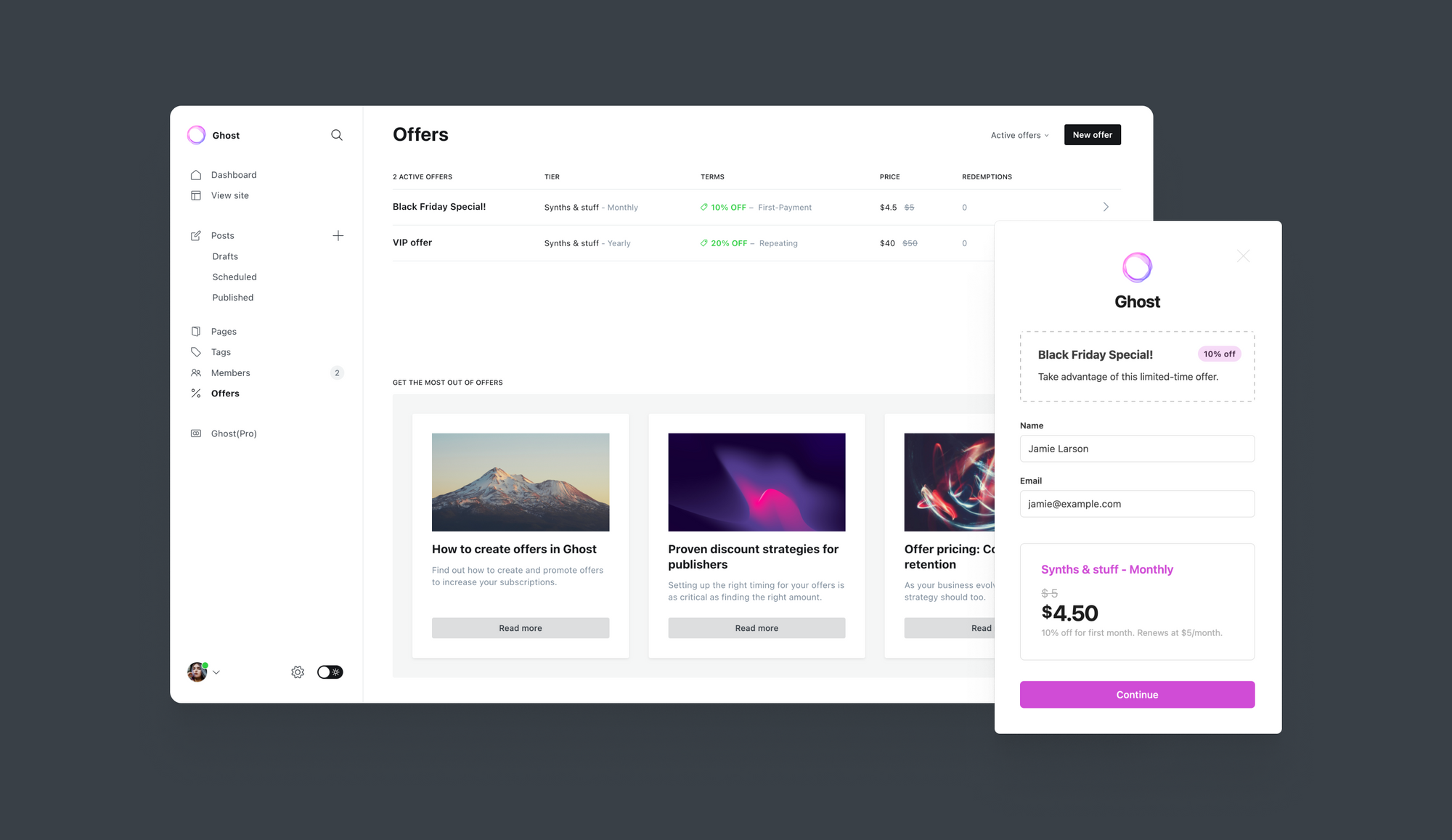 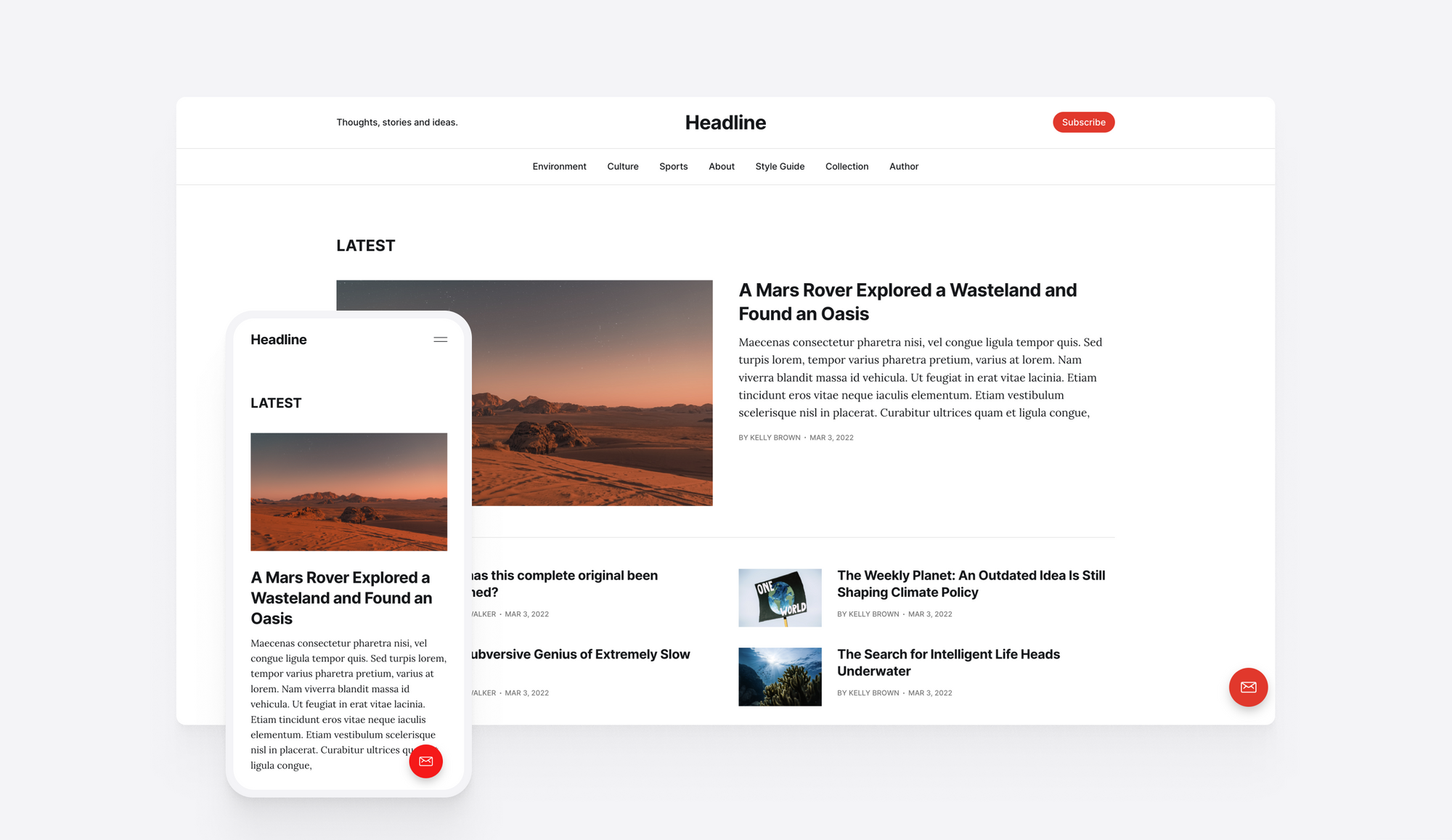 On top of all the user-facing changes, we also have some exciting updates and changes for developers who build-on and work-with Ghost:

Well, for a start we're going to take a breather for a bit. It's been a pretty crazy few months here, and the whole team has earned some rest. After that we'll come back, take stock of all your feedback, and get back to work.

We're a team of 31 people now, spread all over the world, and Ghost's own revenue is now about $5M/year (up almost $2M from this time last year). We're still an independent, self-funded nonprofit organisation that can never be bought or sold. And, everything we do is still decentralised and open source.

Can't count of how many people said "that will never work" - but we're still here.

Each year there seems to be a new hype-cycle competitor that pays wild sums of money to get people to use their product, tries to centralise creators under a proprietary iOS app, and convince everyone that their "network" is going to solve everything – but each year we stick to the same thing we've always stuck to:

If that sounds like the sort of work you'd enjoy, we're actively hiring JavaScript developers to join the open source product team and help build what's next. 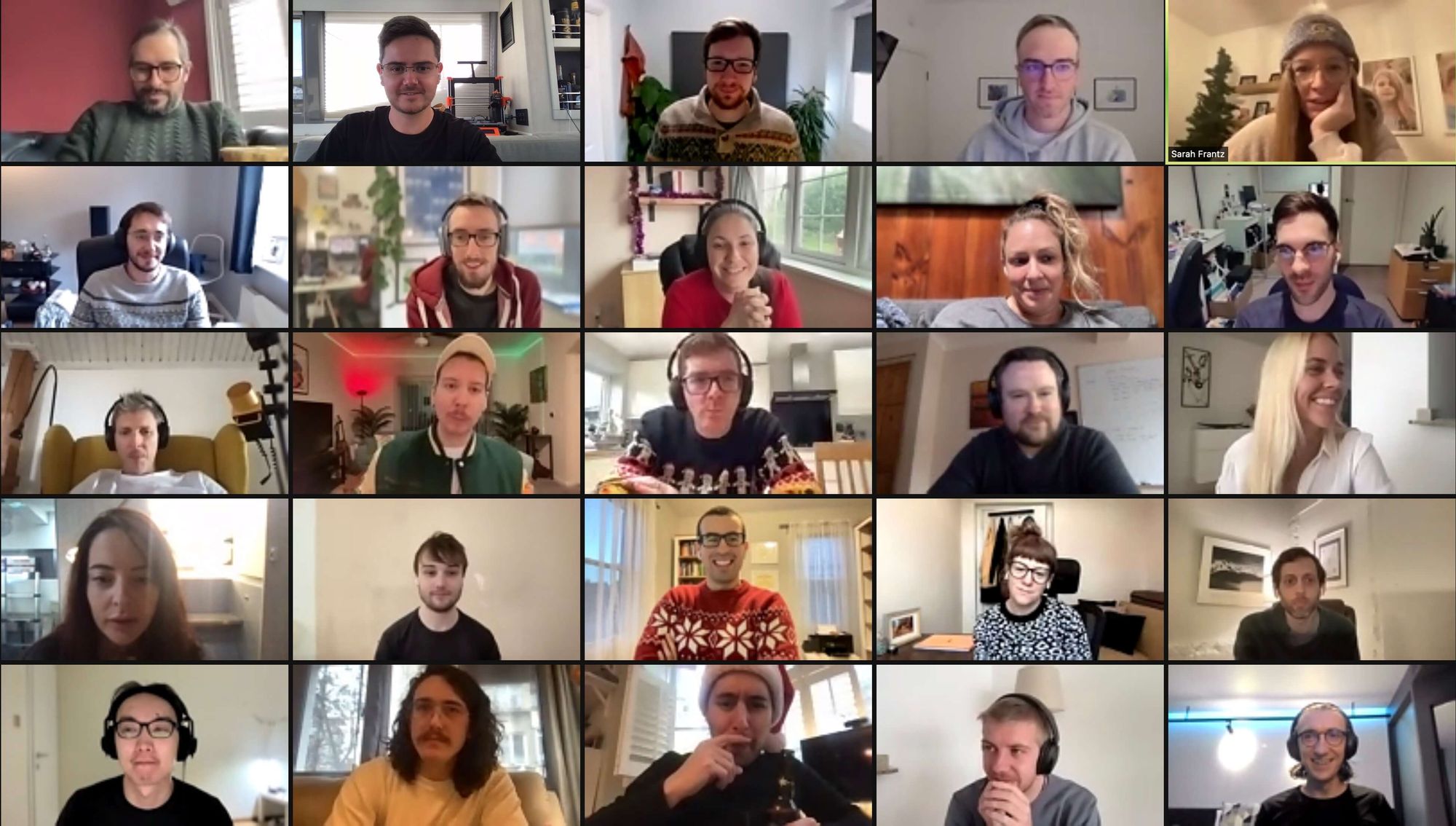 The team that made 5.0 possible + Not pictured: Rish, Djordje, Bob, Simon & Emily

All new sites on Ghost(Pro) are running 5.0. You can spin up a new site in a few clicks and access all of the latest features with a 14-day free trial.

Already on Ghost(Pro)? Log into Ghost.org and click the "Update to 5.0" link your admin panel, any time. Get in touch with support if you have any trouble.

Self-hosting Ghost? Update to 5.0 using Ghost-CLI — here's the Ghost update guide. Keep in mind, this is a major version with breaking changes. Please allow some extra time and make backups.

you guys are killing it… seriously

This is awesome news, but at which point you’ll implement multi language support for core and features like newsletter functions etc.? I think the community would adopt it immediately and work on language files ASAP.

This is standard for more than a decade in open source projects, I really can’t understand why you’re fully ignoring anything than the English speaking part of the world.

Many congratulations and all the best.

Am I missing something here? Don’t we already have many of these “new” features in v4? Don’t get me wrong, it’s great the product is advancing, I’m just struggling to see what has actually changed, that’s all.

@wisernewsletter Ghost follows semver versioning. Majors are more about being able to make breaking changes, clean up deprecated features, move things out of beta, and roll up/polish everything that’s been introduced since the last major.

Actually, I am thinking why you guys are not including the followings with your updates.

Ghost already has an option to log in to readers. You can use it and create an option for members to save articles to read later.

Ghost already has an option to log in to readers. You can use it and create an option for members to make comments.

It just goes to show that with a lot of hard/tireless work and focused/quiet dedication of talented and skilled people, anything is possible. Naysayers can eat their own words now.

At a grand scheme of things, it’s not even about technology; it’s about people. People are the key enablers that make things possible. It’s about putting together a group of people and having them work together towards a common goal and for a common cause.

It’s also about putting other people’s needs before your own. That’s most challenging in a world dominated by greed and power. The rich few are increasingly using technology to control and benefit from the many less fortunate, influencing (free) speech and (free) thinking as well as (free) elections.

I believe open source software and code literacy is a necessity for a sustainable and democratic future. It’s not only practical to improve and build a better product, it also allows one party to hold another party accountable, very much like the written words in a contract. Code is the most powerful form of art: it’s using words to create virtual worlds and virtual products, all of which can interact with tangible objects in the physical world in one way or another. It’s the greatest invention of the last century. But before software can drive profit, you need people to make it possible, and you need to go through the learning process.

Thanks to everyone that worked on this! I look forward to trying the new version.

Ghost already has an option to log in to readers. You can use it and create an option for members to make comments.

I’m really curious about this feature. I honestly implemented Disqus on my site but if there is a way to enable Ghost commenting for members that would be much better. Is there more info you have on this? I couldn’t find anything on the forum aside from requests for this feature.

Is it possible to continue to use Sqlite with ghost 5?

Thanks to everyone that worked on this! I look forward to trying the new version.

This topic was automatically closed 14 days after the last reply. New replies are no longer allowed.