How to insert an image 'card' into HTML or markdown block?

Trying to migrate from WordPress. Wondering how people handle this workflow…

Typically, I write markdown which I export to HTML and drop into the editor.

In WordPress, I then add my images at the appropriate point in the content and it inserts a figure with markup I am halfway happy with ;)

However, with Ghost, it doesn’t look like there is any way to add an image halfway down the HTML content I have added.

How are you supposed to handle this workflow in Ghost, without needing to break up your content into individual blocks?

Sounds like you’re putting all your HTML into a single HTML card.

If you want to mostly keep that work flow, you could paste into the editor (creating one card) but then cut and paste out of that first card into separate cards to create separate cards before/after each inserted image, so that you’re working with the regular Ghost editor for adding images, rather than the HTML card.

Thanks Cathy, I feared that might be the answer! That’s defo not something I want to get into, adds a lot of friction.

Will have to rethink!

So how complex /is/ your markdown, and do you need to convert it to HTML before moving it into Ghost? I’d suggest trying pasting markdown straight into the Ghost editor. NOT in a markdown card, just paste it in. When I did that, here’s what happened:

Result of pasting into Ghost: 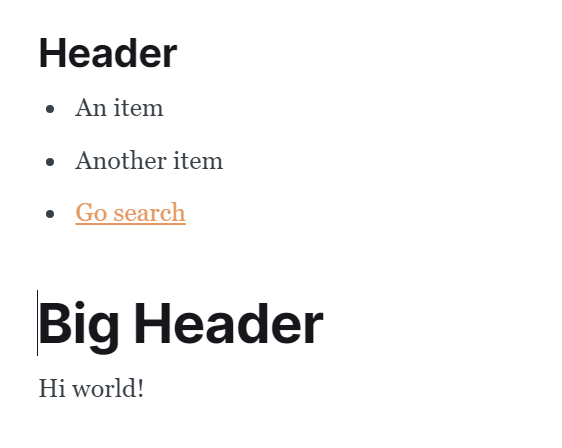 That’s native Ghost editor, NOT in a card, and so adding an image is as straight forward as hitting return to get a blank line and then hitting the image button.

Try it? Or what about your use case am I missing?

Thanks Cathy, could have sworn I’d tried that but must have tried adding it into a markdown card. Will try again this way, thanks!