For a site running on Ghost Pro, custom theme. 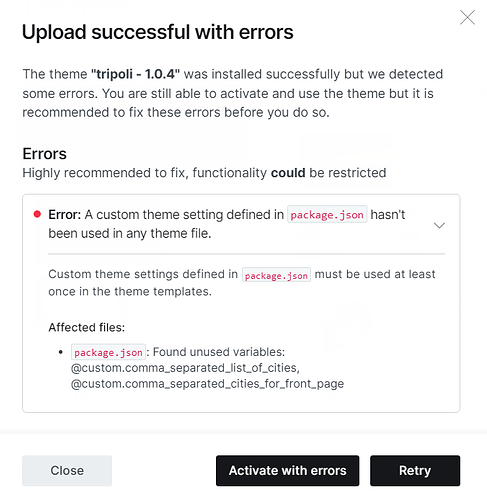 And from a custom partial:

I tried loading this theme into another Ghost Pro site, and got the same error, so although I originally suspected that perhaps the problem was that I was uploading a file with the same name as previously, I now have a clean install that gives the same error.

(EDIT: Went back and fixed a separate theme error, in case it was responsible for this erroneous error. Nope, but providing a clearer bug description above.)

Have you tried to upload this to a self-hosted one? If you want to try with an older version, I can help you, as I have several Ghost instances running behind a few updates.

I think it’s a bug due to an “edge case” - this rule comes from the AST Linter which only looks for path expressions (e.g. {{@custom.comma_separated_list_of_cities}}), and doesn’t analyze special cases such as the handlebars-style paths used in the filter param of the {{#get}} helper